Gastronomies from Argentina, Korea, Japan, the Mediterranean, the Basque Country and Vietnam inspire the ninth edition of Culinary Zinema 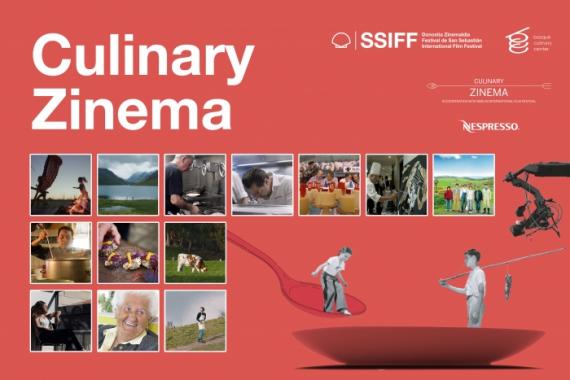 Culinary Zinema, the San Sebastian Festival section combining cinema and gastronomy, brings in its ninth edition not only ingredients such as cheese and chocolate, but also others, more intangible, including the relationship with local producers, integration in a host country, family transmission, beauty and the medicinal properties of food.

Yoshihiru Fukagawa (Chiba, Japan, 1976), who presented his film Byakuyako / Into the White Night (2011) in the Panorama section at the Berlinale, will present in San Sebastian the European premiere of Sora no restaurant about a farmer dedicated to making cheese who is encouraged by a chef’s visit to join his friends in opening a restaurant for a single day only, serving food made using nothing but local produce with a low carbon footprint.

The other Japanese production is the debut film by Takashi Watanabe, author of several TV documentaries. Le chocolat de H, selected for the Seattle and Tokyo festivals, follows a famous master chocolatier and a pastry chef who, having won five times at the Salon du Chocolat in Paris, continue to travel around Japan and Ecuador in search of new recipes.

Park Hye-ryoung, who has directed more than 40 documentaries for South Korean television, premiered in Hotdocs his film The Wandering Chef, looking at the famous chef Jiho Im, who travels all over his country to find ingredients with healing properties.

Mariko Bobrik has an outstanding career as a maker of short films. Kooniklaster (2007) won the best international short film award at the Los Angeles Festival and Necesito saber (2015) was presented at Cannes. In addition, the Polish filmmaker has been selected for the Cinéfondation (2012) and Berlinale Talents (2013) programmes. Her first feature film, The Taste of Pho, stars a Vietnamese chef living in Warsaw, where he tries to fit in with the European culture that his daughter has already accepted as her own.

The first feature film by Michael Lei, Un sabor de cielo / A Taste of Sky, premiered at the Tribeca Festival. The film follows the destinies of two Bolivian students at the Gustu restaurant, a cookery school for young disadvantaged people founded by Claus Meyer, one of the creators of the restaurant named best in the world four times, Noma.

In Cocinar belleza, Sergio Piera tries to answer a question: Can a flavour be beautiful? The debate, directed by the publicist Toni Segarra and the chef Quique Dacosta, under the production of The Mediapro Studio, poses the question to a group of artists.

Iñaki Arteta (Bilbao, 1959), author of Trece entre mil (2005) and 1980 (2014), takes a closer look at the personality of the chef at the Etxebarri steakhouse in Bittor Arginzoniz. Vivir en el silencio, about a self-taught culinarian who has made his restaurant one of the best in the world.

Lastly, the journalist Mikel Urretabizkaia, author of El secreto de Urdaneta, follows the trail of the Idiazabal cheese universe in the Urbia, Aralar and Gorbea mountain ranges. Gazta boasts, among others, the testimonies of Eli Arrillaga, Juan Mari and Elena Arzak, Eneko Atxa and Joan Roca.

The short film Zer jan hura izan, by Igor Arabaolaza, takes the testimonies of producers and chefs to analyse subjects including sustainability, the generation takeover, the importance of the producer in cuisine and of the rural world.

The section will also include the three winning short films of the Nespresso Talents contest in Spain: La receta de la vida /The Recipe of Life (Marta López and Eduardo Peiró), Huele a ti / Smells like You (Marc Vadillo and Marwan Sabri) and Nouvelle Cuisine (José Prada and Victoria Fresneda).

Seven of the nine feature films in the section will be accompanied by themed dinners, taking place from September 21-27 at the Basque Culinary Centre, at the Ni Neu restaurant and at Tabakalera’s new LABe space. Tickets for the film and dinner will be available for purchase on the Festival and Kutxa websites from 9:00 on Friday, September 6, at a price of 70 euros. Tickets for the films alone will go on sale on September 15 at a price of 7.90 euros.