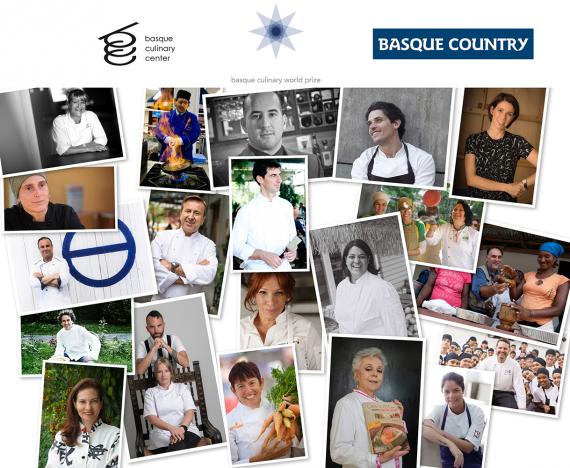 The Top 20, reflecting the global reach of the prize, includes chefs from Brazil, Canada, Chile, Colombia, Denmark, France, India, Italy, Mexico, the Netherlands, South Africa, Spain, the UK, the US and Venezuela. These projects are focused on everything from innovation to education, health, research, sustainability, social entrepreneurship and philanthropy, and the preservation of local cultures.

A generation of international chefs have now expanded their role in society and redefined their profession by integrating new skills, creativity, innovation and social concerns into their approach. The Basque Culinary World Prize celebrates this evolution.

These twenty shortlisted chefs are building on the work of a pioneering group that started this movement, which include Gaston Acurio, Ferran Adrià, Dan Barber, Heston Blumenthal, Massimo Bottura, Claus Mayer, Jamie Oliver, Rene Redzepi and Alice Waters, among others.

The Basque Culinary Prize will be awarded at the Basque Culinary Center (BCC) in San Sebastian, a world leading academic institution in gastronomy. The prize is organised and promoted jointly by the BCC and the Basque Government under the Euskadi-Basque Country Strategy.

“It has been exciting to see that there are chefs who are using the essence of our profession to promote change or be part valuable projects that contribute to society in so many different ways.  That’s something we couldn’t have even imagined a few years ago. I’m so proud of my peers”

“We are thrilled by the diversity and caliber of our Top 20 finalists, who show the powerful, positive change chefs can make when they take on the responsibility of a public voice. Their stories will surely serve as an inspiration to their colleagues all over the world, which is the ultimate mission of the prize. It will be a difficult but exciting challenge for the Jury to choose one winner this summer.”

The Top 20 Finalists are:

Alberto Crisci, UK: Crisci’s charity, ‘The Clink’, has a series of fine dining restaurants inside four British prisons, in which offenders learn to cook and serve, and can gain vocational qualifications to give them real job opportunities when they leave – all with the aim of reducing rates of reoffending.

Alicia Gironella, Mexico:  Gironella is a slow food activist who takes part of projects like Semillatón, to preserve native Mexican corn seeds, preventing local species from become extinct. The seeds are placed in community banks to distribute among farmers in Sierra Tarahumara for cultivation.

Angel León, Spain/USA:  Chef Angel León is renowned for his provocative culinary innovation at his restaurant, Aponiente.  Passionate about research, he has been exploring the potential of the oceans as a food source and is documenting valuable knowledge that could preserve exciting new possibilities for future generations.

Ann Cooper, USA:  The Chef Ann Foundation gives schools the tools and resources to move away from serving highly processed foods, to providing fresh, cooked-from-scratch meals. This has the aim of contributing towards the reduction of childhood obesity in the United States.

Carlos Zamora, Spain: The Spanish chef has built a reputation for responsible and sustainable restaurant and team management, around which he has developed strong networks with organic producers. He also supports social initiatives such as Depersonas – which trains and employs young people with learning disabilities.

Daniel Boulud, France/USA: French chef Daniel Boulud is the co-director of New York charity, CityMeals on Wheels, which provides healthy meals to elderly people who cannot buy food or cook for themselves. Boulud is also in charge of ‘Chefs Deliver,’ an initiative in which top chefs cook gourmet meals for the elderly homebound.

Gabriel Garza, Mexico: Inspired by working at a local centre for the visually impaired, Garza singlehandedly set up Destellos de Sabor, a project that teaches the blind to cook for themselves, giving them independence, self esteem, and the potential to find future employment.

Jessamyn Rodriguez, Canada/USA: Harlem based Canadian, Jessamyn Rodriguez, created a 9-month training programme for low-income, immigrant women to become artisanal bakers with Hot Bread Kitchen. Through an employer-driven workforce development and business incubator, it helps women and men professionalise their skills in the culinary arts in order to be able to earn fair wages and achieve financial independence.

José Andrés, Spain: Following the devastation of the earthquake in Haiti in 2010, Jose Andres started World Central Kitchen to use the expertise of its chef network to empower locals by providing them with clean cooking stoves and food safety/sanitation training. Additional programs include feeding programs in schools and culinary training for the local hospitality workforce.

Joshna Maharaj, India/Canada: Canadian chef Joshna Maharaj works with several hospitals and institutions to help them serve better food to patients. In particular, Maharaj rethinks and redesigns all elements of the food chain, from farm to fork, in favour of healthy, fresh, nutritious meals.

Kamilla Seidler, Denmark, and Michelangelo Cestari, Venezuela: Seidler and Cestari were chosen by Claus Meyer to take his Melting Pot project to Bolivia where they opened the restaurant Gustu, which also functions as a cookery school. Gustu has put a culinary spotlight on a previously overlooked country; as well as serving to train and empower locals through a wider knowledge and consciousness about their ethnic gastronomy.

Leonor Espinosa, Colombia: Leonor Espinosa is the founder of Funleo, an organisation that aims to preserve the food traditions of Colombia while highlighting sustainable practices and local food production. Its focus is on afro-descendent, indigenous communities, and helping them to develop and market their traditional crops and ingredients.

Manoela (Manu) Buffara, Brazil: Brazilian chef Manu Buffara is nominated for her work in Ilha Rasa, in Curitiva, where she fights besides some 20 producers to preserve traditional ingredients, farming methods and biodiversity.  She also encourages locals to explore the potential of their agriculture.

Margot Janse, Holland/South Africa: Dutch chef Margot Janse runs Isabelo, an initiative that started with a simple gesture - a nutritious muffin given to 70 school children in Franschhoek, South Africa - which has now become a program that produces 1,300 meals a day for local schools.

Maria Fernanda Di Giacobbe, Venezuela: Maria has built a whole chain of education, entrepreneurship and economic development around Venezuelan cacao. With Kakao and Cacao de Origen, she supports local producers with the resources they need to improve their product. She also helps women to get the necessary training and tools to become chocolate entrepreneurs themselves.

Nani Moré, Spain: Nani Moré is the founder of the Asociación de Comedores Ecológicos (the Ecologic Canteen Association), in Catalonia. She directs documentaries and shorts campaigning for better food for children, and has been working with several institutions to prove that fresh, nutritious food can be made at low cost, ensuring that children get the good food they need.

Rodolfo Guzman, Chile: Rodolfo Guzman, who exemplifies culinary innovation, is passionate about discovering native ingredients from all over Chile, from which he has created hundreds of new dishes and flavours at his research center, Conectaz, in Boragó. The center employs a multidisciplinary team who also look at the ingredients with a view to future food security and sustainability.

Teresa Corçao, Brazil: Teresa Corçao is the founder of the Instituto Maniva, created to nurture organic family farming and better nutrition in society as a whole. Maniva’s Ecochefs network was set up in 2009 to promote ethical cuisine as well as to encourage communication right across the food chain, from producers to consumers.

The 20 Basque World Culinary Prize finalists were chosen by a multi-disciplinary Prize Committee who met ten days ago in Vitoria, Spain. They were chaired by celebrated Basque chef Elena Arzak and included an international group of academics with expertise in various aspects of food culture and gastronomy.

Entries came from over 30 countries worldwide, and a total of 110 chefs were nominated for projects including everything from innovation to education, health, research, sustainability, social entrepreneurship and philanthropy, and the preservation of local cultures.  To be considered for the award, chefs had to be nominated by another professional currently working in the world of gastronomy - for instance, another chef, food writer or food supplier, or an institution.

The Prize Jury will also include leading experts in related disciplines, including US food scientist and writer Harold McGee; Massimo Montanari, a professor of Medieval History at Bologna University and one of the world leading experts in Food Studies; renowned novelist Laura Esquivel; and Hilal Elver, Special Rapporteur on the Right to Food for the United Nations High Commissioner for Human Rights (OHCHR).