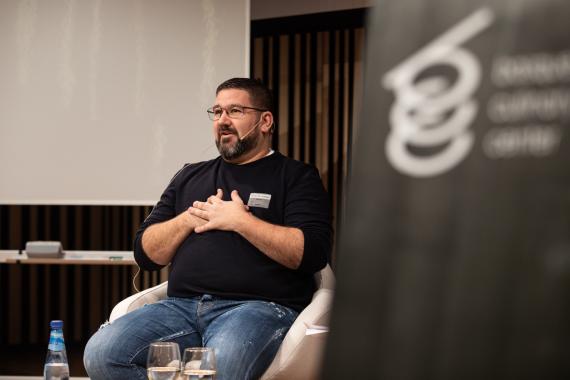 Basque Culinary Center received a visit this morning from chef Dani García of Andalusia, who gave his first talk after closing his his three-Michelin-star restaurant. “Dani García. Punto y seguido” (Dani García: The Story Continues) was a unique event that filled the auditorium to capacity in which the chef reflected on his career path and the closure of his restaurant, and spoke of his future challenges and projects alongside journalist Marta Fernández Guadaño.

Joxe Mari Aizega, director of Basque Culinary Center, welcomed Dani García and presented the conference, recognising the chef&#39;s great culinary work and his bravery in facing the search for new horizons in the sector.

After the “last supper” at Dani García&#39;s restaurant last Saturday, which brought together more than 40 Michelin stars, Dani García is now ready to embark upon a new stage in his career. San Sebastian was the city where the chef from Marbella took up his trade two decades ago when he decided to tackle haute cuisine, and today Basque Culinary Center was able to witness the start of this new phase for the cook.

“Being a Michelin-starred chef is something quite attractive, but behind all the glamour there is a business – and also a lot of drama,” stated the chef while noting some of the reasons why the direction of his career has changed. As he explained before the students and others in attendance at the Basque Culinary Center, “the past leaves many scars” and the success he reached was the result of a long and hard journey full of effort and sacrifices.

“I have been working for 20 years to get to this point.” García aimed to “fight for the third Michelin Star so as to subsequently begin to fight to take on the world,” and today that new period is starting – a period in which he will leave haute cuisine aside and concentrate on the Grupo Dani García growth strategy both inside and outside of Spain.

In 2020, Dani García is facing a new period that will bring him to open between five and ten restaurants both inside and outside of Spain, aiming to feed thousands of people and make those who work for him happier, noting “my main responsibility is the team, not the three Michelin Stars.”

“Increasingly, restaurants are no longer just about the cooking,” and despite his dream to create “a single brand,” his new strategy is going to be based on growth (sometimes with other companies), emphasising where, how, and with whom.

As he said, “the world is much better prepared nowadays and we have to move forward to change things,” and that includes changing the concept of “haute cuisine” for more economical and affordable gastronomic models, always taking the “Spanish cuisine” essence and foundation around the world. He added, “if I ever decide to return to haute cuisine one day, it will be with a different concept and outside of Spain.”

After analysing his career path from a close and personal point of view and explaining his new challenges and business strategies to the audience, the talk wrapped up with a series of personal and professional tips for students studying degrees at Basque Culinary Center.

One of those tips emphasised the fact that “everyone must pursue whatever dream they want, bearing in mind that in the end it´s a business.”