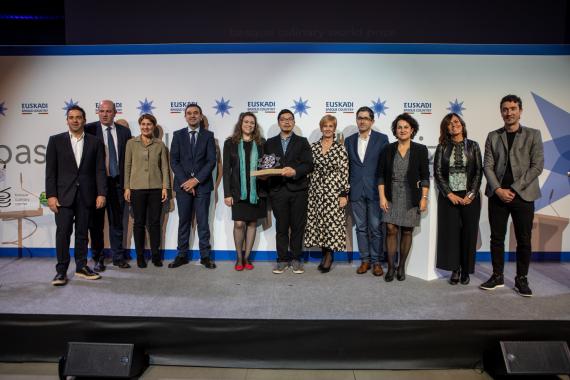 The Basque Culinary World Prize is organized and promoted by Basque Culinary Center, a world leading academic institution in gastronomy and the Basque Government, under the Euskadi-Basque Country Strategy. It is an award for chefs transforming society through gastronomy in areas ranging from innovation to education, health, research, sustainability, social entrepreneurship and economic development.

In the presence of a distinguished audience, the Basque Government’s Councillor for Economic Development and Infrastructure, Arantxa Tapia, will award Anthony Myint the prize, now in its fourth edition, for his work exploring the cross section between restaurants and the environment. Through his ZeroFoodprint organization and the Perennial Farming Initiative, Myint advises food businesses on viable options to reduce their carbon footprint, and even go carbon neutral. He has convinced dozens of high-end restaurants around the globe to join his crusade for sustainability  including Noma (Copenhagen), Atelier Crenn (San Francisco) and Benu (San Francisco).

In 2019, via the Perennial Farming Initiative, he also joined forces with the state of California to launch the Restore California Programme. The programme arms suppliers and consumers with transparent information about the environmental footprint of restaurants so they can make better informed decisions. All restaurants on the list can either be carbon neutral or support local farmers to remove carbon dioxide from the atmosphere.

The chef has long been committed to using gastronomy to help combat climate change. Equipped with a degree in Economics and Asian Studies, Myint – alongside his wife, journalist Karen Leibowitz – have incorporated environmental and social activism into their endeavors, since Myint began his career at the acclaimed eatery Mission Street Food back in 2008.

Chef Myint aims to have one percent of California’s restaurants sign up for the surcharge in the first year, which he estimates would generate about $10 million USD a year to help farmers sequester carbon.

The Basque Culinary World Prize fund of €100,000 will be used by Anthony Myint to spread the Zero Foodprint initiative around the world and help different restaurants developing and implementing sustainable practices that will reduce carbon and greenhouse gas emissions. But overall, he will keep trying to raise awareness within the global population about the necessity of facing the climate change.

"Receiving the BCWP is the greatest honor of my culinary career! But more importantly, the prize and the pledge by the incredible chefs of the jury to participate in Zero Foodprint, will show that restaurants can lead society toward healthy soil as a global climate solution."

The Basque Culinary World Prize was launched in 2016 as an initiative that would bring to life   the ways in which gastronomy can make an impact on society by showcasing the work of entrepreneurial men and women who strive for excellence and who are, most importantly, strongly committed to their societies.

Entries for the Basque Culinary World Prize 2019 came from 42 countries worldwide, and a total of 150 chefs were nominated. Nominations were open from February-May 2019 for chefs – not projects – whose work has transformed society through gastronomy. The BCWP encourages nominating chefs of any nationality, regardless of their level of fame or recognition. To be nominated for the award, chefs had to be nominated by another professional currently working in the world of gastronomy: for instance, another chef, food writer or food supplier, or an institution.