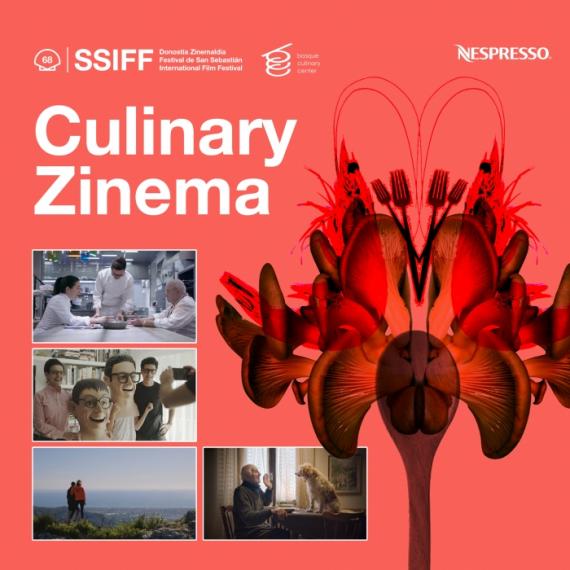 ‘ARZAK Since 1897’ to open Culinary Zinema

The Festival will host the international premiere of ‘The Truffle Hunters’, screened at Sundance and included in the Cannes 2020 official selection

Twelve renowned chiefs will participate in the themed dinners, which will take place at the Basque Culinary Center

ARZAK Since 1897, the documentary by Asier Altuna about the restaurant run by Juan Mari Arzak and his daughter Elena, will open the Culinary Zinema section which, at the San Sebastian Festival’s 68th edition, will have another three feature films. Camí lliure / Free Way (Vía libre), by Ángel Parra, also has a strong family component and shows the relationship between chefs Raül Balam and his mother Carme Ruscalleda, while La receta del equilibrio, by Óscar Bernàcer, places the chef Ricard Camarena before the challenge of opening his premises after the lockdown. Lastly, The Truffle Hunters, by Michael Dweck and Gregory Kershaw, brings a portrait of several elderly people and their search for the coveted white truffle in Italy’s Piedmont region.

ARZAK Since 1897, Camí lliure / Free Way (Vía libre) and La receta del equilibrio will screen in San Sebastian as world premieres, while The Truffle Hunters will be an international premiere.

Asier Altuna (Bergara, Gipuzkoa, 1969) returns to the Festival after participating in sections such as the Official Selection, where he competed with Amama (Irizar Award, 2015), having screened Bertsolari (2011) out of competition, and participated in New Directors and the Basque Cinema Gala, where he respectively presented Aupa Etxebeste!(Youth Award, 2005) and Agur Etxebeste! (2019), both co-directed with Telmo Esnal. In ARZAK Since 1897, which participated in the Lau Haizetara Documentary Co-production Forum in 2018, he analyses the transform of traditional cookery into the new cuisine d’auteur through the Restaurante Arzak. Juan Mari and his daughter Elena, who has been running the business for some time now, are the leading characters in a film also featuring the appearance of colleagues including Ferran Adrià, Pedro Subijana, Joan Roca, Karlos Arguiñano, Andoni Luis Aduriz and Dabiz Muñoz, among others.

For his part, Ángel Parra (Madrid, 1978) gets to grips in Camí lliure / Free Way (Vía libre) with the story of how Catalan chef Raül Balam overcame the odds, and how, having beaten his drug addiction, he had the opportunity to run the prestigious restaurant of his mother, Carme Ruscalleda, but rejected the offer to follow his own path. With different responsibilities as a director and producer with TVE, Ángel Parra already approached foodie films in Soul (2017), a documentary about chefs Eneko Atxa and Jiro Ono.

Author of different fictional and non-fictional works, Óscar Bernàcer (Palma de Mallorca, Spain, 1978) has already collaborated with Ricard Camarena over three seasons of the documentary series Cuineres i cuiners. Now, in La receta del equilibrio, he once again works with the Valencian chef, portrayed as he sets about the difficult task of reopening his restaurants after the lockdown while the local vegetable garden, heedless of the pandemic, continues its natural cycle of growth.

Having co-directed their first feature films, The Last Race (2018), Michael Dweck (Brooklyn, New York) and Gregory Kershaw (Utica, New York) join forces once again on The Truffle Hunters, which had its premiere at Sundance Festival and is part of the official selection for Cannes 2020, cancelled due to Covid-19. The film follows a handful of men in their seventies and eighties who, accompanied by their dogs, search the forests of Italy’s Piedmont region for the rare and coveted Alba white truffle.

The four titles in the section will be accompanied by themed dinners, to take place from September 21-24 at the Basque Culinary Center. Tickets for the screenings and dinners will go on sale on the Festival and Kutxabank websites at 09:00 on Friday, September 4, at a price of 70 euros. Tickets for the films alone will be available for purchase at a price of 7.90 euros from September 14 for screenings on the 21st, 22nd and 23rd, and from the 15th in the case of the session on the 24th.

The dinner on the 22nd will be laid on by Ricard Camarena. The Valencian chef from the Ricard Camarena Restaurant, an eatery with two Michelin stars, will spell out his gastronomic proposal based on flavour and respect for the product. His is a creative cuisine, committed to tradition and flecked with cosmopolitan, Mediterranean and timeless influences. In 2018, Ricard Camarena received the National Gastronomy Prize as Best head chef from Spain’s Royal Academy of Gastronomy.

Raül Ballam, son of Carme Ruscalleda and chef of the restaurant Moments (two Michelin stars) in Barcelona, will lay on a dinner bringing this edition of Culinary Zinema to a close. Moments takes the shape of a gastronomic space based on the concept of the San Pau restaurant, created by Carme Ruscalleda, modern Catalan cuisine taking its inspiration from the seasonal products of the Maresme region.

The dinners have been designed according to a strict protocol of safety and hygiene in view of COVID-19. All professionals participating in the dinners, both in the kitchen and in the dining room, will wear specific IPE protection equipment. Hand sanitiser dispensers will also be available in the different spaces, where the diners will be invited to proceed in certain directions to prevent cross contamination. Access to the dinners will be strictly controlled. The number of attendees has also been reduced to 60 people, as per current regulations, and seating at the tables will be distributed according to the bookings made and observing the recommended distance. All of these measures will make the Basque Culinary Center a safe space.